Modified Mee Shunt is an aortopulmonary central shunt developed in 2012 by Dr.Bugra HARMANDAR for the palliation of newborns with ventricular septal defect (VSD), pulmonary atresia and very hypoplastic pulmonary arteries. 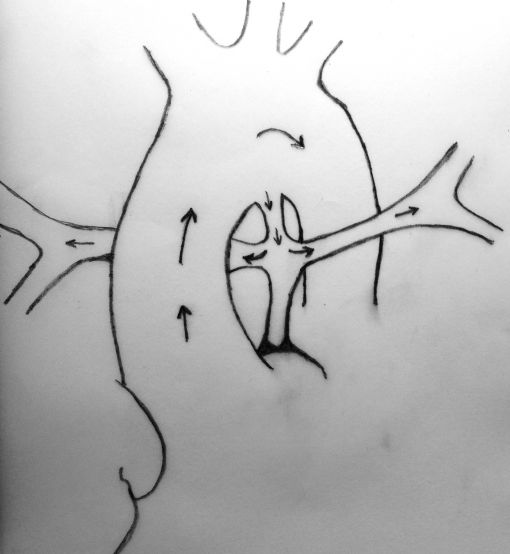 Neonates with pulmonary atresia, ventricular septal defect, and very small pulmonary arteries without major aortopulmonary collaterals are ductus dependent from birth and are not amenable to a primary corrective procedure in neonatal period. The initial approach in these patients is to ensure continued adequate pulmonary blood flow in anticipation of imminent spontaneous closure of the ductus. A direct main pulmonary artery (MPA) to ascending aorta end-to-side central shunt was first described by Watterson et al which was also been termed the “Mee Shunt” after the senior surgeon involved in its description. Although, this original technique has the advantage of creating a central shunt that will allow the growth of both right and left pulmonary arteries equally without the use of a prosthetic graft, it also has several limitations. Original technique requires transection of MPA at the right ventricular outflow tract (RVOT) end which is followed by an end-to-side anastomose of native MPA to the ascending aorta as posteriorly as possible to reduce right pulmonary artery (RPA) distortion.
A sufficient length of MPA is obligatory in this technique to achieve a tension-free anastomosis. In patients with a short MPA, an anteriorly tilted or a stretched anastomosis usually results in decreased blood flow through the anastomosis. Meanwhile, MPA is usually very hypoplastic at the transected end (adjacent to RVOT) which will cause a narrow anastomosis and limit the shunting blood flow. The modified technique which we describe herein, requires the use of a prosthetic graft between the transected end of MPA and the ascending aorta which will lengthen the MPA and prevent stretching on the anastomosis. 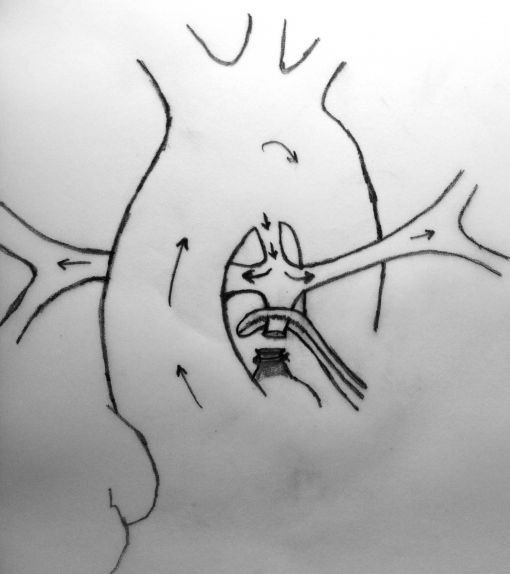 MPA is transected at the right ventricular end and clamped. Pulmonary blood flow is maintained by patent ductus arteriosus.

In this method, more constant blood flow may be achieved due to the stiff nature of the prosthetic graft at the both ends of anastomosis and a relatively larger site of MPA may be used due to the adequate amount of tube length between aorta and the pulmonary bifurcation. Meanwhile this long tube leaves RPA free as to prevent stretching and kinking. 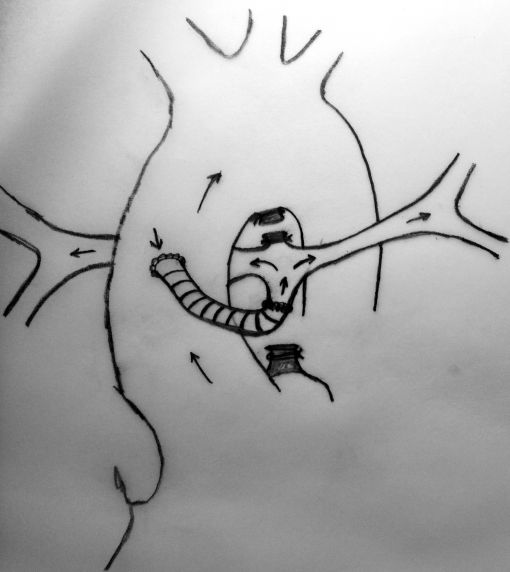 Another advantage of this modified technique may be the decreased necessity of cardiopulmonary bypass (CPB) during the procedure. As known, if possible surgeons wish to achieve all cardiac surgeries without CPB due to its deleterious effects, but especially in newborns. Thus, if it was considered to achieve an anastomosis between MPA and ascending aorta without CPB, patent ductus arteriosus (PDA) must be patent throughout the procedure to maintain sufficient oxygenation. This can be carried out by clamping the MPA as inferiorly as possible not to influence the PDA flow at the pulmonary bifurcation. However, this inferior clamping usually results in an insufficient MPA length for a tension-free anastomosis and requires lifting the clamp up towards the bifurcation. Cross-clamping the MPA close to the pulmonary bifurcation may decrease PDA flow and cause desaturation which usually results in the need for CPB. Due to above mentioned reasons, we considered to develop this modification which will not decrease PDA flow and not require CPB during the shunting procedure. A small polytetrafluoroethylene (PTFE) graft in 3,5 mm diameter was used to extend the transected end of MPA which will be anastomosed to the ascending aorta. In this modification, MPA is not stretched, shunt flow is not reduced and RPA is not distorted due to a tension-free anastomosis. Meanwhile, end-to-end anastomosis between MPA and the PTFE graft assisted to achieve wide blood flow through a well-shaped and unsqueezed patent tunnel through the ascending aorta to the pulmonary bed.

http://youtu.be/K5rTZsRAH24
(Presentation of the technique in Turkish)