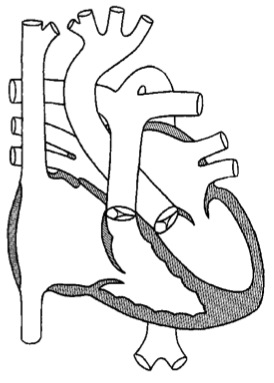 Type A interrupted aortic arch without VSD or with a small VSD is usually repaired much like coarctation of the aorta with end-to-end anastomosis (see Coarctation of the Aorta). As the site of interruption moves more proximally, the patient is more likely to have a nonrestrictive VSD and a one stage repair of the aortic arch and intracardiac anomalies is performed. Repair of type B and C interrupted aortic arch requires cardiopulmonary bypass, with deep hypothermia and circulatory arrest. Since there is interruption of the aorta, a unique cardiopulmonary bypass technique is utilized. The arterial limb of the cardiopulmonary bypass circuit is divided into two arms. Perfusion of the proximal aorta is accomplished with one arm, and perfusion of the distal aorta is accomplished with the other arm via cannulation of the patent ductus arteriosus. Once total body hypothermia has been attained, cardiopulmonary bypass is discontinued and the cannulae are removed. Direct anastomosis of the upper aortic and lower aortic segments is usually possible. With recannulation of the aorta in the traditional way, cardiopulmonary bypass is resumed. Associated defects such as ventricular septal defect and atrial septal defect are now repaired. Transesophageal echocardiography, proximal and distal aortic pressure measurements and oxygen saturation comparison are utilized to confirm adequacy of repair. Delayed sternal closure is sometimes required following this repair.

The postoperative course following repair of type B or C interrupted aortic arch with ventricular septal defect can be variable. This operation represents a major undertaking for a neonate. Preoperative pulmonary overcirculation or recent resuscitation from ductal closure could result in hemodynamic instability in the postoperative period. Invasive monitors utilized following repair include arterial, central venous and left atrial catheters. An oximetric catheter placed in the pulmonary artery is utilized to monitor pulmonary artery pressure and cardiac output. Vasoactive infusions required for hemodynamic management might include dopamine or dobutamine, epinephrine, milrinone, nitroprusside or phenoxybenzamine, and norepinephrine. Sedation with intravenous infusions of fentanyl and a neuromuscular blocking agent is often required to reduce pulmonary artery hypertensive episodes. Inhaled nitric oxide has proven useful in the management of pulmonary artery hypertension. Postoperative bleeding is a rare complication, but may occur since the surgical repair involves suture lines exposed to systemic level pressure. Atrioventricular conduction disturbance is a potential complication since the surgical procedure involves working near the atrioventricular conduction tissue. Temporary pacing capability should be readily available. Postoperative arterial oxygen saturation and intracardiac pressures should be normal. Length of hospital stay following repair of interrupted aortic arch is variable, but two weeks or more is average.